What do these things have in common:  Q’Viva – The Chosen, The Miami Dolphins, Kohl’s newest clothing line, Emme Maribel Muñiz, and Maximilian “Max” David Muñiz?

They are all joint projects of Jennifer Lopez and Marc Anthony.  (Okay, the Dolphins have a lot of owners, including J Lo and Anthony.)

On July 16 the couple made a joint announcement in civil, even downright social, tones that they had agreed to divorce and had agreed on almost everything.  This is a very public way to end a seven year marriage begun by a wedding where the guests did not know it was a wedding, and not just an afternoon party, until they were already there.

The marriage may have begun in some secrecy, but it is ending publicly and with a very clear message that both parties are in control of their own divorce.

As the list emerges of “everything” they have agreed upon, it becomes quite understandable why they want clear control and agreements.

First, and of course of most importance are their three year old fraternal twins, Emme and Max Muniz.  J Lo and Anthony both apparently recognize and appreciate the impact their split will have on their young children.  Maintaining a united front will make it easier for each of them to be a solo parent as the need arises. 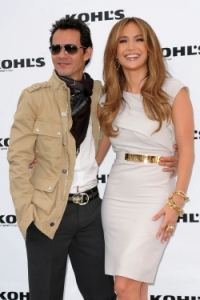 department stores.  According to New York Magazine, the department store has already released information that the fashion lines will move forward as a men’s line by Anthony and a Women’s line by Lopez.  Each party has signed an individual contract which they each still plan to fulfill.

The television show in which two of the biggest Latin Pop Stars in the U.S.travel Latin America looking for talented musicians, Q’Viva – The Chosen, is also still a go, according to msn.com.  The genuine enthusiasm by each of them on the show’s promotional website: www.qvivathechosen.com makes it apparent why they need to keep their world from crumbling, even as they dissolve the marriage at the center of it all.

These are megastars who have built a world together.  Just because their marriage has ended does not mean they need to destroy all the good that has come from their partnership.

What We Love:  These talented artists are each known for their passionate performances, but are able to set their passions aside for the bigger picture here.  Their children, their careers, and the careers of others are all intimately tied-up together here.  Their true passion might just be preserving the greater good they have jointly created.